The artist puts a new level of interpretation into the group of figures with the symbolic representation of Generation. A pair of oversized hands conceals the new person finding protection in the life experience of the older. Linked to this is the demand of the New Generation to provide for protection and accompaniment. For man is and remains the hope of man. 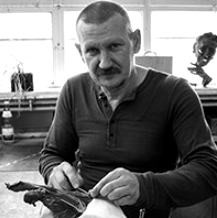