A masterful play with proportions, surfaces and depth effects: Laugomer’s bull is no copy, but a kaleidoscope of imaginings people have of the idea of the bull. 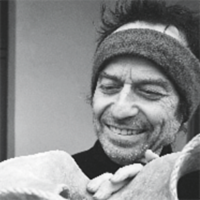 How does an artist come up with a theme, an idea? It is a question that no one can really answer, even after decades of research in the study of creativity. Biographical explanations would seem to suggest themselves, but they were not the reason that the great Spanish artist Picasso, for instance, kept turning to the motif of the bull, which is often considered to be very ‘Spanish’.

other works by David Laugomer